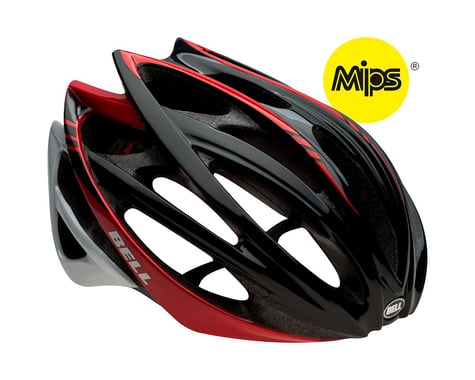 Unavailable Online
Write the first review
Check Store Availability
This item is not available for purchase online. You may want to search our site for a similar item.
Tested by the pro peloton and designed to their exacting standards, the Bell Gage MIPS helmet is designed for speed and performance. Weighing in at only 244g, the Gage MIPS lightens the load with featherweight webbing, buckle and cam-lock levers, plus a streamlined EPS foam liner. Fusion In-Mold Polycarbonate Shell with Internal Reinforcement provides maximum protection and 26 channeled vents deliver head cooling performance. X-Static Padding is quick-drying and absorbs odors caused by sweat. Twin Axis Gear retention system with vertical and circumferential adjustment gives you a perfect fit. Get in the fast lane with the Gage MIPS.</p> <br><b>MIPS Technology</b></br> <p>Multi-Directional Impact Protection System (MIPS) is a technology composed of three main components: an interior foam liner, a Low Friction Liner and an elastomeric attachment system between them. In an angled impact, the elastomeric attachment system stretches to allow the interior foam liner to rotate independently around a rider's head and redirect energy. The system moves only a few millimeters, but Giro's testing has shown that helmets equipped with this technology can reduce the amount of rotational force that may be transferred to the brain in certain impacts.</p>