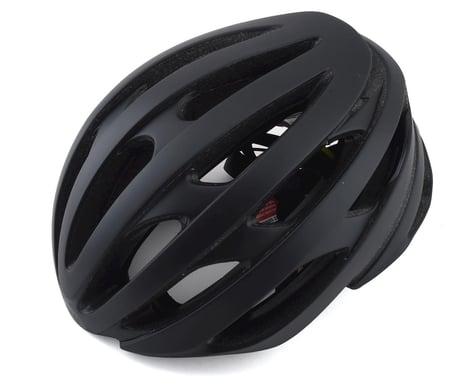 Bell's Stratus MIPS Helmet combines lightweight aero efficiency with cutting-edge comfort technologies. The shape was refined for all-around road performance, ventilated for long climbs but still fast for the flats. The integrated float fit system offers comfort and security with a streamlined fit and an oversized dial that's easy to adjust with one hand. The overbrow ventilation system pulls cool air in through the front and pushes it through an air-channel matrix to reduce overheating. And thanks to the adjustable no-twist tri-glides, the straps stay flat and properly positioned no matter how hard you're hammering. This model also includes MIPS (Multi-Directional Impact Protection System) for added protection in certain types of impacts.

Mixed Reviewer
Verified Owner
Bell Stratus MIPS Road Helmet (Matte Black) (L)
I’ve been a completely satisfied Bell bike helmet customer since 2008, having worn at least 3 Bell helmets without complaint, but changes to Bell’s helmet design required me to try other brands when making my most recent helmet purchase. I’ll briefly describe my experience, which a few readers may find helpful, at least if they have large heads.

I have a very large head. Most baseball caps and bike helmets don’t come close to fitting me. While my head is very large front to back, it’s not especially large side to side. You could say the crown of my head is more oval shaped and less round. I usually wear size 7 3/4 or 7 7/8 hats. As I recall, I measured my head circumference and came up with 61 cm. I also have a fairly large face, especially top to bottom.

Until now, Bell helmets have been perfect for me. I love my Bell Gage, which is size Large. It’s light, cool, and comfortable. Unfortunately, I needed to find a new model helmet because a small piece in the Gage fitting system broke after 5 years, and the Gage has been discontinued. (I probably should have replaced it a year or two ago anyway.)

Buying a helmet during a pandemic is difficult. I couldn’t try them on in stores so I placed all orders online.

The Bell Stratus MIPS version looked similar to the Gage so I bought it, also in size Large. When I tried it on, it felt a little snug compared to the Gage, but the fit of the helmet itself was acceptable, or at least close to acceptable. And then I tried to strap it on. I literally could not attach the straps around my chin. For a while I thought I must be doing something wrong, and I watched several videos to see if Bell had changed the way you’re supposed to adjust the straps. Unfortunately, the straps are just too short for my large head and large face. The Bell Stratus seems like a well-made and highly adjustable helmet, but it doesn’t work for me at all. I later found other internet reviews from people who also complained that they couldn’t wear the Bell Stratus because straps are too short.

The Bell Stratus was not available in size XL so I bought a Giro Syntax MIPs in size XL instead. Perhaps I should have tried the Giro Syntax in size Large. I don’t know. Since Giro and Bell are now affiliated companies, I assumed the Large version of the Syntax also would be too small for me. What I do know is that when I tried the size XL version, it looked ridiculous. The front went down almost to my eyebrows and my pale skin almost seemed to illuminate the spaces made by the vent holes. The size XL Giro Syntax is also the only helmet I’ve ever purchased in which the plastic harness that cradles the helmet around my head actually rubbed against my ears. I think Giro might be a better brand for people with rounder crowns than mine.

I then decided to try two Specialized helmets, the Propero 3 and the Airnet, both with MIPS and both in size Large. From what I can see, neither is as adjustable as the Bell and Giro models. Basically, the shape and size of the triangle formed by the straps around the ears seems to be held constant regardless of how much you increase or decrease the strap length, Putting that limitation aside, both the Propero 3 and the Airnet seem pretty nice for oval shaped heads like mine. The Airnet seemed slightly more roomy on the inside. Also, while I couldn’t get the straps on the Propero 3 to sit quite right around my ears, the straps on the Airnet do sit fairly flat against my skull and avoid coming into contact with my ears.

The Specialized Airnet is the only one of the four helmets that I have actually worn during a ride. It seems fine. Not great but not bad. It feels hotter than my Bell Gage, but I guess that’s OK, since it supposedly will be 15% more effective if I crash and hit my head, thanks to the MIPS technology.

I’m returning the Bell Stratus MIPS size L, the Giro Syntax MIPS size XL, and the Specialized Propero 3 size L.
View all reviews (1)
Note: All measurements are provided by the manufacturer and may vary depending on how measurements are acquired.
Related Products
Contact Us
1-800-727-2453
Live Chat