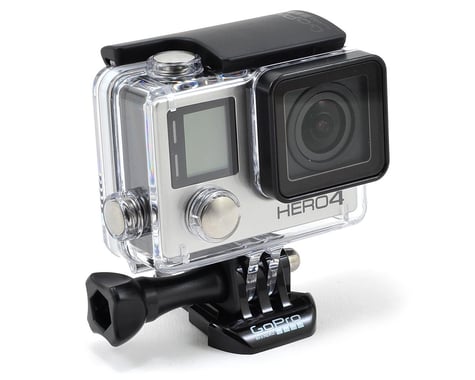 Discontinued Online
This item is discontinued and no longer available for purchase. You may want to search our site for a similar item.
Check Store Availability
The GoPro HERO4 Black Edition Camera is the most advanced GoPro ever. Featuring improved image quality and a 2x more powerful processor with 2x faster video frame rates than its best-selling HERO3+ Black predecessor, HERO4 Black takes Emmy® Award-winning GoPro performance to a whole new level. Incredible high-resolution 4K30 and 2.7K50 video and high frame rate 1080p120 video enable stunning, immersive footage of you and your world. Protune™ settings for both photos and video unlock manual control of Color, ISO Limit, Exposure and more. Waterproof to 131’ (40m) with 12MP photos at a blistering 30 frames per second and improved audio when compared to the HERO3+ Black, HERO4 Black is the ultimate life-capture solution.

This product was added to our catalog on October 3, 2014

Brandon
Verified Owner
GoPro HD HERO4 Black Edition Camera
Amazing videos. Mainly shoot at 1080p/120fps but the 4k at 30fps is CRISP! Battery life seems short when using, but no different than any other go-pros. If you own any other GoPro cameras, it unfortunately can't use older batteries. The menu structure and settings within the camera have really been thought out. Easy to change and set up. Unlike the Hero3, this does not come with the wifi remote.
View all reviews (1)
Contact Us
1-800-727-2453
Live Chat