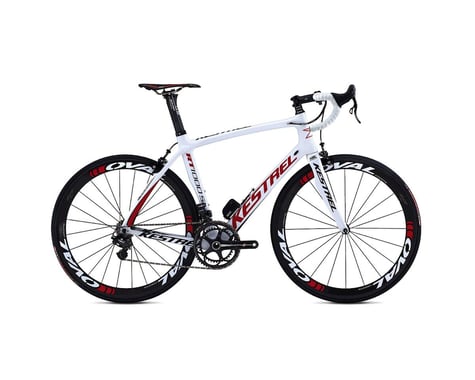 YB-RTSL-47-P
Kestrel
Unavailable Online
Write the first review
Check Store Availability
This item is not available for purchase online. You may want to search our site for a similar item.
Um, wow? While Kestrel believes that lighter, stiffer and faster bikes begin on paper, it's something else entirely to see a few scribblings like, "Campagnolo Super Record EPS", and, "Oval 946 Carbon Clinchers", come to fruition. The 2013 Kestrel RT-1000 SL with Campagnolo Super Record EPS is more than a mouthful, it's an engineered masterpiece. <p>Every Kestrel design is proprietary and engineered from scratch in Philadelphia, Pennsylvania. The process begins with computer-aided design and analysis. Once the modeling is over, Kestrel builds structural prototypes and submits them to a battery of laboratory tests, miles of riding under both sponsored athletes and the highly knowledgeable engineers themselves. The result is a Kestrel carbon frame that is executed with a high degree of engineering mastery. The RT-1000 SL is made from a special 800k high modulus carbon fiber. While the Kestrel 700k material is incredibly stiff, the 800k carbon is 30% more stiff, and allows Kestrel to use 20% less material in the production of the frame. The BB30 press fit bottom bracket with ceramic bearings and a tapered head tube further the amount of frame stiffness and smooth handling. The RT-1000 SL frame is simply built to dish out massive amounts of wattage and quickly. </p> <p>The RT-1000 SL features a drivetrain worthy of any art exhibit. Unlike other electric shifting systems, EPS allows you to hold down the lever and shift multiple gears, even the full range of the cassette if necessary, in a single action. In addition to the three classic lever functions, the EPS Ergopower controls are equipped with the "Mode" key. By briefly holding this, you can check the battery charge level. Hold the key down longer and you can access the adjustment mode, which allows you to make micro adjustments to your front or rear derailleur settings without ever taking your hands off the levers. The geometry of the rear derailleur parallelogram has been made more rigid and optimized to promote interaction with the electronic parts. The built-in resolver inside the actuator is capable of reading the movements of the rear derailleur at any time and optimizing its position by communicating with the DTI (Digital Tech Intelligence). For added efficiency, the pulleys roll on Campagnolo's own CULT ceramic bearings. Further, Super Record EPS is 100% waterproof; all control components are built to operate in any weather conditions. One full charge on EPS is good for 1,200 miles, so don't worry about running out of juice.</p> <p>Oval Concepts has long been revered for producing high quality components. The Oval 946 carbon aero clinchers provide a speed and stiffness advantage with a 46mm rim height. They are outfitted with Vittoria Open Corsa EVO tires that have a slick surface for low rolling resistance and a wider 25c profile for greater stability, especially while cornering. A 700 series saddle with chromoly rails and a Kestrel EMS Pro Aero seat post add more efficiency to an already streamlined high performance road bike.</p>
Related Products
Contact Us
1-800-727-2453
Live Chat