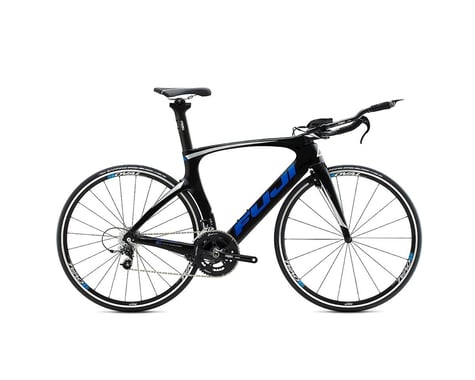 Unavailable Online
Write the first review
Check Store Availability
This item is not available for purchase online. You may want to search our site for a similar item.
Note: Manufacturer does not allow coupons
The 2015 Fuji Norcom Straight 2.3 is a truly performance driven time trial/triathlon bike for those looking to make a meaningful entrance into that racing category with leading carbon fiber frame technology. Fuji's designers worked hand in hand with Olympic traithlete Matty Reed and pro triathlon champions Sarah Haskins and Cameron Dye to develop new aero shaping techniques, addressing issues from a pro rider's perspective, and then translating these inputs into a bike that more than holds its own on any time trial/triathlon circuit. </p> <p>The Norcom Straight's C5 carbon frame and FC-330 carbon fork technology feature technology that increases stiffness, steering response, and of course, aerodynamics. Norcom was engineered largely in the legendary A2 Wind Tunnel facility in North Carolina, where designers were able to reduce the drag on every yaw angle on the frame and fork, and incorporate the most developed shaping techniques in the industry. The result is one of the industry's lightest and stiffest full monocoque C5 carbon frames. </p> <p>Norcom Straight's designers moved the rear brake to a chainstay mount directly behind the bottom bracket (as opposed to being on the seat tube in previous bikes), and opted to go with a pressfit BB86 bottom bracket which moves the bearings outward on the crank axle improving the stiffness of both the frame -- through a greater cross-sectional width at the BB shell -- and the crank itself. The result was a surprising 26% increase in stiffness in the BB area, which to a triathlon or time trial rider equals faster times. </p> <p>With full consideration that aerodynamics are not only critical for the bike, but also for the rider, Fuji paid careful attention to the adjustability of the rider's position on the Norcom Straight. As input from their top-level riders indicated, an aero bike is an absolute necessity, but a bike must have the versatility to get any rider into an optimized aero position while still maintaining a position in which the rider can run for extended periods of time comfortably and efficiently--designers and athletes agree that this is among the greatest feats achieved on the Norcom Straight project, producing a bike that any rider can race on and reap its greatest benefits. </p> <p>Norcom 2.3 boasts a full menu of performance-driven components such as an Oval alloy crank with a 53/39T chainring configuration for high torque acceleration and increased top-end spinning speeds. The shifting setup is SRAM Rival 11-speed for shifting that is smooth, responsive, and stays in reliable adjustment so you don't lose precious seconds due to clunky shifting.</p> <p>The Norcom Straight's own TRP aero TTV brakes provide outstanding stopping power and modulation, modulation being a critical asset to time trial/triathlon riders. TRP aero TTV brake modulation responds to the rider's subtle pressure at the levers, affording the rider cornering and descent control that shave the seconds that can literally mean the difference between winning and losing. </p> <p>Oval Concepts delivers an impressive array of components geared toward aerodynamics, light weight, and rider adjustability with adjustable alloy aero bars, multi-position carbon seat post, chromoly railed saddle, all riding on a pair of Oval 527 alloy clincher wheels which have all the lightweight and stiffness you need for quick acceleration and ease over rolling terrain. </p> <p>The Norcom Straight 2.3 is an all-around winner, and an excellent way to enter the realm of high-end time trial/triathlon racing bikes. On every front, this bike has been set up for competitive speed, is highly customizable, and ready to help you maximize your performance in your next time trial or triathlon.</p>