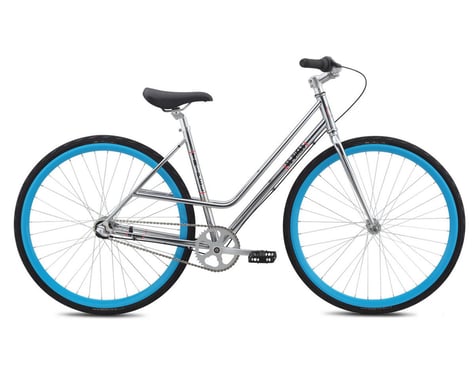 Unavailable Online
Write the first review
Check Store Availability
This item is not available for purchase online. You may want to search our site for a similar item.
Note: Manufacturer does not allow coupons
<p>New for 2015 is SE's 2015 Tripel women's chrome city bike with a sleek and lightweight step-through frame with butted top and down tubes for comfort and rigidity. The Tripel has strength and longevity, like its namesake for triple-malted beer. The Tripel also scores high on versatility, and is ready for your personal touches to make it your work or commuting bike. The frame has water bottle and fender mounts. The Tripel's unique 3-speed Shimano Nexus drivetrain is contained in the rear hub, so no derailleurs to maintain. Speaking of brakes, the hub also houses the stop-on-a-dime coaster brake for when dangerous obstacles get a little too close for comfort.</p> <p> To maximize efficiency and keep the weight down, the Tripel rides on a pair of high-profile SE double-walled alloy rims and Vera City Wide tires to give you incredibly low rolling resistance and superior traction in all conditions. SE outfits the Tripel with its own fixed components, including an SE Classic seat with a convenient bottle opener. The grips are provided by Smooth and have Rubber SE end plugs. For a sleek, smooth, and strong city commuter, the 2015 SE Tripel women's chrome city bike can get it done.</p>