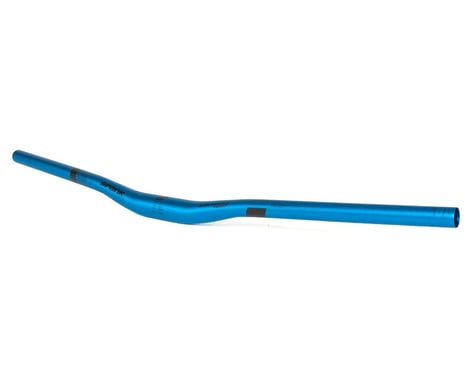 Discontinued Online
Write the first review
Check Store Availability
This item is discontinued and no longer available for purchase. You may want to search our site for a similar item.

Whether its safety, price, or environmental responsibility, alloy has always been a favorite of many mountain bikers for bars. However, it wasn't until SPANK Industries introduced its patented Vibrocore™ anti vibration technology that alloy bars could match the stiffness, comfort and lightweight of carbon bars. The OOZY Trail 780 Vibrocore Bar is trail tuned and weight optimized in every way. Utilizing a special zirconium doped 7-series alloy blend, Dual XGT tapers and SPANK's proprietary CNC Bending process, SPANK achieved a remarkably trim weight in a wide 780mm length. The Trail Tuned geometry positions the rider's weight slightly more forward, to enhance traction on the front wheel. The OOZY Trail 780 Vibrocore Bar is the ultimate in trail handlebar for those seeking performance, comfort and unbeatable value.

Vibrocore:
Impulse and vibration damping core.
The theory behind SPANK‘s Vibrocore™ Impulse and Fatigue Damping System is simple. Like all forms of energy, the vibrational energy that is transmitted through your bars to your hands, is made up of waves, which can be measured in amplitude and frequency. The more dense a material, the higher its ability to transmit energy waves. Alloys have a very high density, and in turn transmit vibrational energy very effectively. Vibrocore™ is a complex, low density material which fills the core of the handlebar, reducing the frequency, amplitude, and duration of energy waves. Not only does the low density of the Vibrocore™ impede the transfer of energy, but as energy waves cross material boundaries from high density to low density, they are refracted and reflected (basically bounced in different directions), reducing their ability to build on one another or sustain vibrational frequencies. Where competitors have been forced to design unwanted flexibility into their bars, SPANK‘s Vibrocore™ system also acts to reinforce the handlebar from the inside, resulting in a more responsive performance and improved sensitivity. The result is a handlebar that feels incredibly strong and rigid, AND acts to reduce impulse and vibrational fatigue. Testing with World Cup Dh racers like Mick and Tracey Hannah, has shown that by reducing the “white noise“ vibration from riding, Vibrocore™ handlebars enhance tactile sensitivity between rider, bike, and terrain, while reducing fatigue. When races are won or lost by milliseconds, this can make all the difference.

Dual XGT:
Extreme gradual taper technology.
Dual Extreme Gradual Taper technology is a proprietary tube drawing process, afforded by SPANK‘s secret state of the art tooling. Dual XGT technology tapers our bars from the thickest area at the bar clamping zone, slowly and GRADUALLY through the bend zones, to the thinnest areas at the control zones...AND...back to thicker reinforced barend zones, or “Impact Ends”. Tapers that occur over too short a distance, or with defined start/end points, create isolated stress zones where breaks can occur. SPANK has utilized FEA (Finite Element Analysis), laboratory, and rigorous real world testing to optimize the spread of material to where it is needed to withstand the specific forces at work in each zone, while offering better protection against crashes than ever before! The extreme precision enabled by Dual XGT drawing processes also eliminates the need for heavy hand grinding, with can result in imperfections and inconsistency in wall thickness, weakening bars.

CNC Bending:
Computer controlled precision three dimensional bending.
SPANK went the extra mile in our handlebar production facility by investing in automated Three Dimensional CNC Bending machines, which offer better symmetry and consistency, and more importantly limit material structural damage during the bending process. During traditional bending processes, bars are mounted in multiple fixtures and bent using mandrels around several sets of radius tooling. Each time the bar is fixtured, symmetry tolerances open. Damage caused to competitors bars during this traditional harsh mandrel bending processes is difficult to measure or detect, leaving the rider at risk. Furthermore, the imprecise and rough process tends to leave wrinkles, bumps and marks on the surface of the bars which must be removed by heavy grinding. Of course this can lead to thickness inconsistencies often in the most critical areas. The precision of 3D CNC Bending in a single fixture allows SPANK to optimize further our designs where others must overbuild with buffer material, and to eliminate the heavy grinding process, making our bars lighter, stronger, and safer! SPANK has also taken extra work hardening steps to ensure the stem clamping area of the bar is uniformly cylindrical and true, and as tough as possible.

Impact Ends:
The most important features of any rim are rigidity and weight. Rigidity or stiffness means more of your energy is transferred into drive force, (rather than flex) and acceleration/cornering/braking performance is improved. Reducing rolling weight in your wheels, more so than any other part on your bike, can dramatically reduce the energy needed to propel it forward. Take a look at a cross section of any given rim on the market. You’ll see that both the outer and inner walls are concave.

Now check out a SPANK rim. Our unique patented Oohbah™ profile with inverted tube well, approaches a toroidal shape, which has the lowest mass and highest stiffness on all planes. This increases rigidity immensely compared with conventional rim designs. The combination of a concave outer wall with a convex inner tube well, results in the addition of a new, never before seen “hoop strength” in the sectional profile, which lends massive strength and stiffness to the rim as a whole, and places the center of inertia in the optimum position nearer the center of the profile. Furthermore the “wave” shape of the Oohbah inner tube well acts like corrugated steel roofing to add strength and support to the vertical rim flange walls and prevent buckling. Normal straight or curved tube wells must be much thicker to offer the same support. The increased strength and rigidity offered by our Oohbah™profile affords us the opportunity to optimize wall thicknesses and material transitions, drastically reducing weight…AND…allows us to offer rims with greater widths, at much lower weights than our competitors. Wider rims mean stiffer wheels and more tire spread, leading to greater traction and improved comfort, and tire performance.

MGR:
Micro grain refinement processed alloys.
Micro Grain Refinement - Processes such as extrusion, forging and tube drawing can increase the strength of alloy materials by reducing the grain size. SPANK uses state of the art proprietary metal forming methods which further improve grain size consistency and orientation, and significantly reduce grain size beyond that of our competitors. No other bars or rims are subjected to the number of drawing steps or level of refinement as those offered by SPANK. This leads to greater ultimate strength, toughness, and ductility ... meaning confidence, comfort and safety.