Bikepacking From Wyoming To California (Part 1)

Bikepacking from
Wyoming to California PART 1

our experience on a 2-week bikepacking trip!

Well, we did it. And I’m not sure I have the words to describe it, but I’ll try. If you’ve been following along, I recently completed a big bike tour so here’s the story of that journey.

In case you missed it, here’s the gear list and some of the initial planning details Bikepacking List

Since this was a through-ride, I shipped my bike to Corey’s house, our starting place, in Casper, WY. It was a scramble to get the final setup dialed and then packed into the shipping box. This was more challenging than I anticipated – typically, I’ve either shipped a bike box with only a bike in it, or a few riding accessories. Shipping it along with my entire touring kit took some serious Tetris. And the shipping weight was scary – 71lbs without any water or food. Yikes! The bike was quoted to arrive a couple of days before we planned to leave, but it quickly got delayed and the panic set in. Fortunately, the tracking info was totally wrong, and it arrived when expected. The same could not be said for my flight – it was canceled and rescheduled for the next day. Apart from this, the rest of the travel was seamless, and I arrived the evening before our departure date. Fergus had arrived a few hours before me, so things were looking good to kick off as planned. Although I stayed up later than I wanted – building my bike and checking my gear – it all worked out. 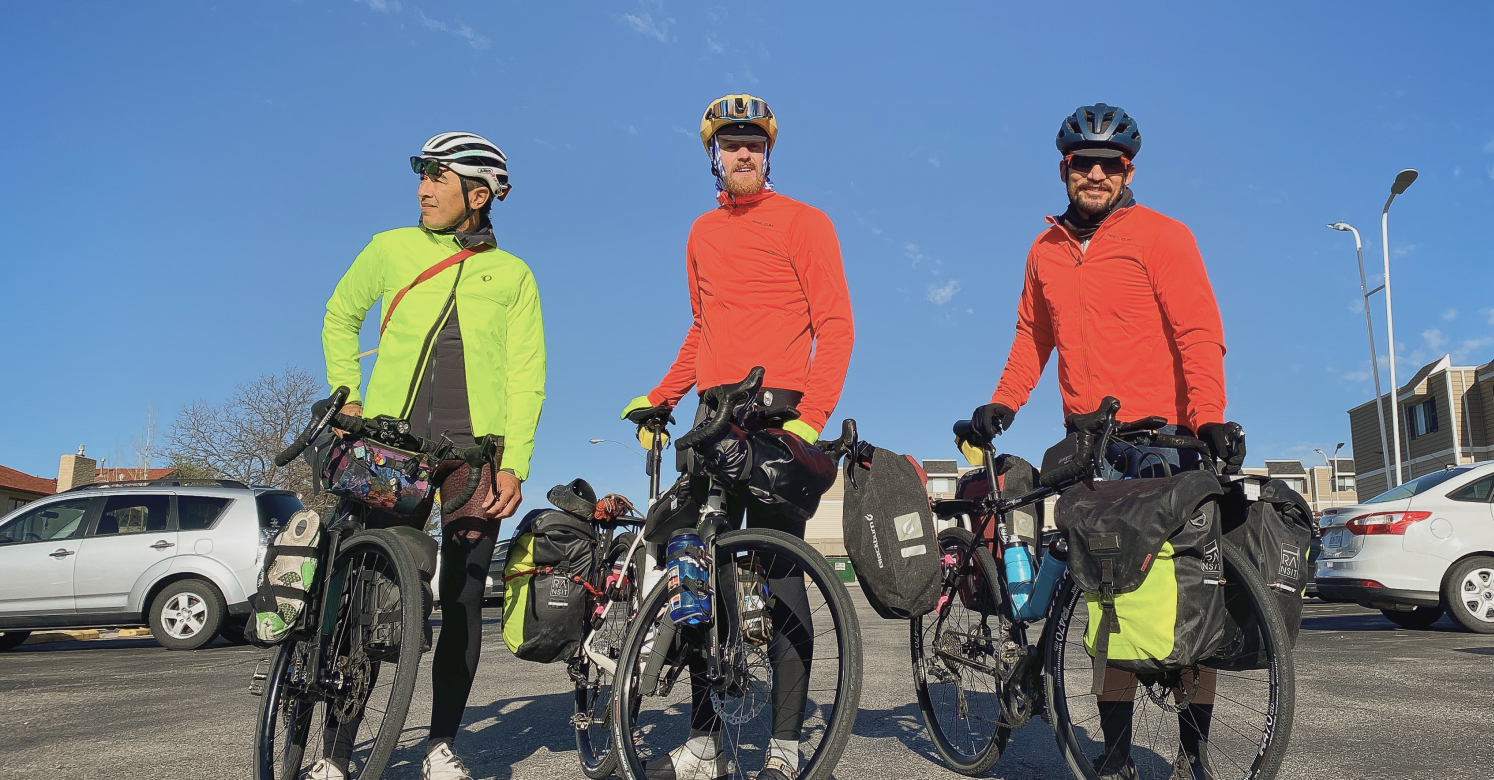 Heading out the door on Day 1 was an interesting mix of emotions. Excitement was there, of course. But nerves were high – did I pack everything? And then some light fear – how hard is this going to be? Do I really want to do this? Once we start, I have no bailout, I have to ride home, and home is a long way away. Fortunately, the saddle is always home, and it only took 30 minutes of pedaling to settle in and focus on the task at hand. In many ways, the task was simple: get from point A to point B. We decided on an 8 am departure to make it to Rawlins, WY – our goal for the day. This was slated to be around a 130-mile day. Fergus was only planning to join us for the first 5 days and would catch a flight out of Salt Lake City, UT. This meant we had to front-load the trip to make sure he made his flight. As you might know, Wyoming is notoriously windy and day one was no exception.

It’s also worth noting that the prevailing winds blow west to east in the spring. Since our route was mostly moving south or west, we were exclusively in a headwind or crosswind. Our halfway point of the day was Independence Rock. We had a lunch of tortillas, peanut butter, jelly, salami, and parmesan cheese – a staple meal on the trip. By the afternoon, the wind had really picked up and we were introduced to the conditions we’d face for the next 3 days. Later in the day, we came across a unique “road find” – a 357 revolver! We admired it but opted to leave it behind. Corey set a location pin and had a friend come pick it up. We eventually made it to Muddy Gap and had the realization that reaching Rawlins was not in the cards for the day. We pedaled until just before sunset, made camp, and went to bed as soon as we could. This was at mile 108. The goal was to get up with the sunrise at 5:30 the next morning and beat as much of the afternoon wind as we could. 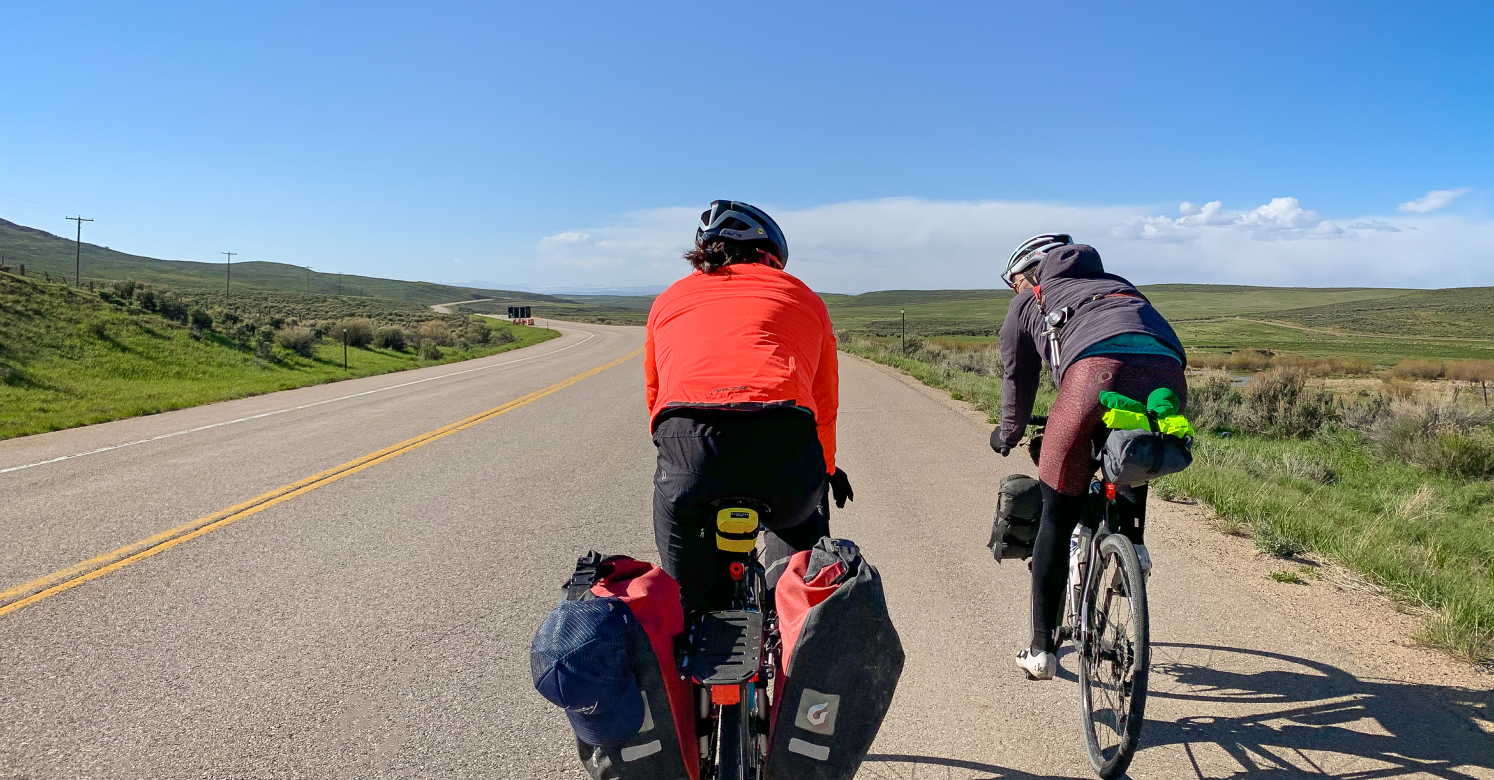 Day 2 we were up at 5:30 greeted by a chilly desert morning. I was not yet efficient with my camp setup, and it took me a while to get rolling. Fergus had used a bivy and a 40-degree rated sleeping bag with a liner. The poor guy didn’t sleep much in the cold that night and as soon as the sun was up, he was ready to get pedaling and warm himself up. We rolled out individually and regrouped in town for a gas station breakfast. Being behind schedule, we decided to attempt riding all the way to Craig, CO – 140 miles away. As it went, beating the wind didn’t happen. By 9 am it was as windy as the day before. There was a lot of climbing to boot. Not even halfway into our day, we changed our goal to Baggs, WY – a 106-mile day. The terrain changed dramatically along the ride. Southern Wyoming began to feel more like Colorado.

Our route changed to gravel for 10 miles, and we climbed up to a beautiful aspen grove. The creeks and streams flowed with snowmelt and shady spots held late-season snowpack. Our route ended on the border of Colorado and Wyoming. The road crossed back and forth between the two states multiple times, finally landing us back in Wyoming. Baggs, WY has a single grocery/convenience store run by a very friendly, multi-generational family. We used the store for our refuel, got directions to the local grill for a burger, and were recommended accommodations at the local Happy Camper RV park. We built camp as the sun set and enjoyed our first shower of the trip. 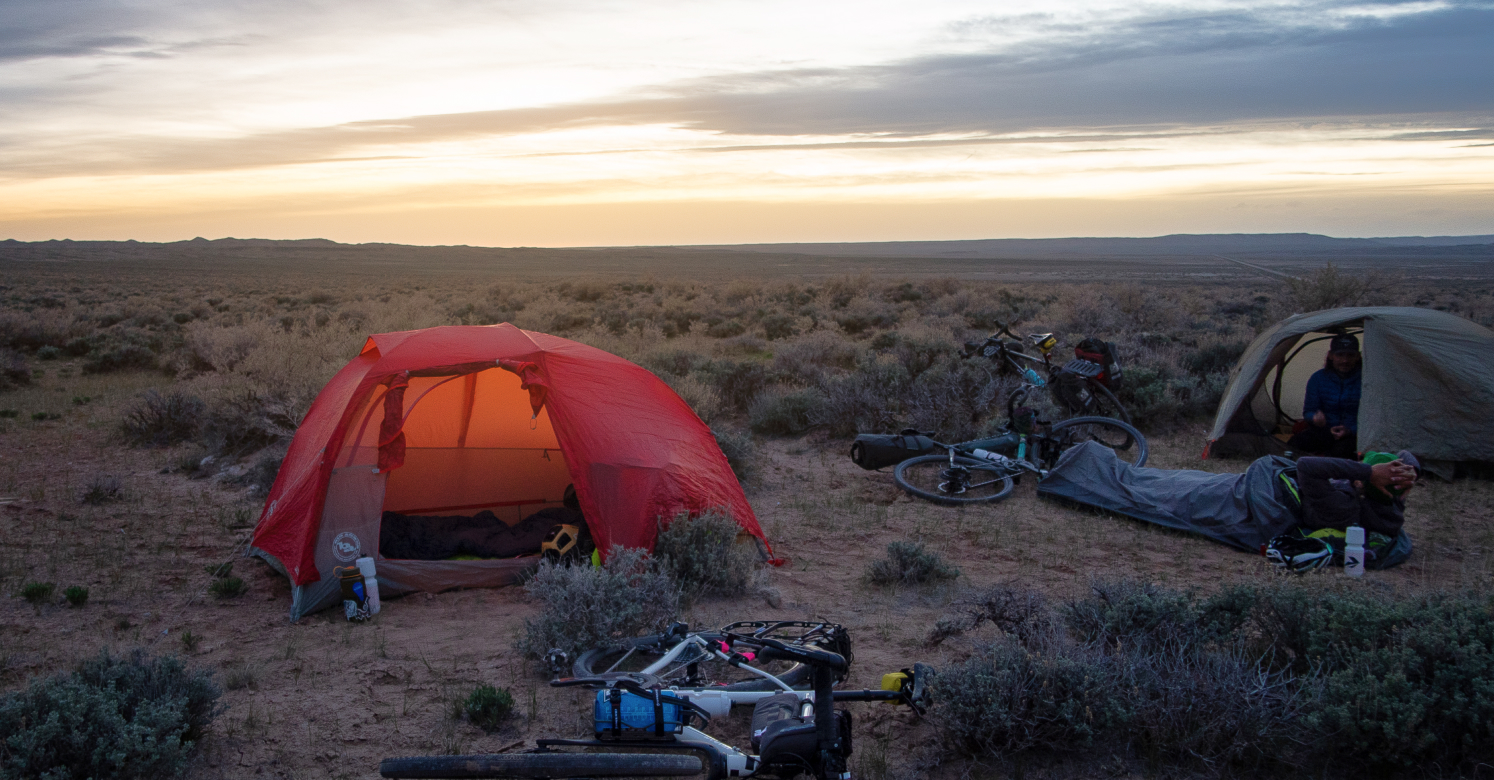 The night was warmer than the first, but Day 3 turned out to be much cooler. Even with a sunrise start, it didn’t take long to find our usual headwind. In fact, it was pretty much windy from the outset. We soon entered Colorado and headed due south into the most direct and cold wind we would face on the trip. It was a strong wind; a constant and gusty wind and it was bone-chilling. For states that experience big winters, there are two seasons – road construction season and winter. Northern Colorado is no exception to this, and we were held up many times by sign turners and one-lane sections of road guided by pilot cars.

They say the hills make you strong, but the wind makes you mean. What they fail to explain is why – drafting in the wind is a must when in a group. But drafting in gusty conditions is both mentally and physically exhausting because of the focus it takes. On a bike tour, you must manage your bags and gear, the bike handles differently when loaded, and you must put your wheel in a safe spot and think of everyone else around you. Just before Craig, we had a mishap where an overlap of wheels caused Fergus to take a spill. Fortunately, the damage was limited to bruises and scrapes, and we were close to Craig where he was able to get cleaned up, sew and patch torn clothing, and dress his wounds. We were grateful to have packed first aid gear and duct tape. Not long after, stormy weather set in and with a long morning of fighting a headwind and a crash just behind us, our motivation to ride in the wet was not there. We hung out in a taqueria for some time, not much spoken. We ate our fill, then ate our fill again realizing our calorie deficit was not being properly replenished by gas station food. After a couple of hours, we had to get going and rolled on, now riding west, directly into a headwind bringing us thunderheads and an obvious storm. Before exiting town, we paused and spent some time playing meteorologist and looking at the weather models. 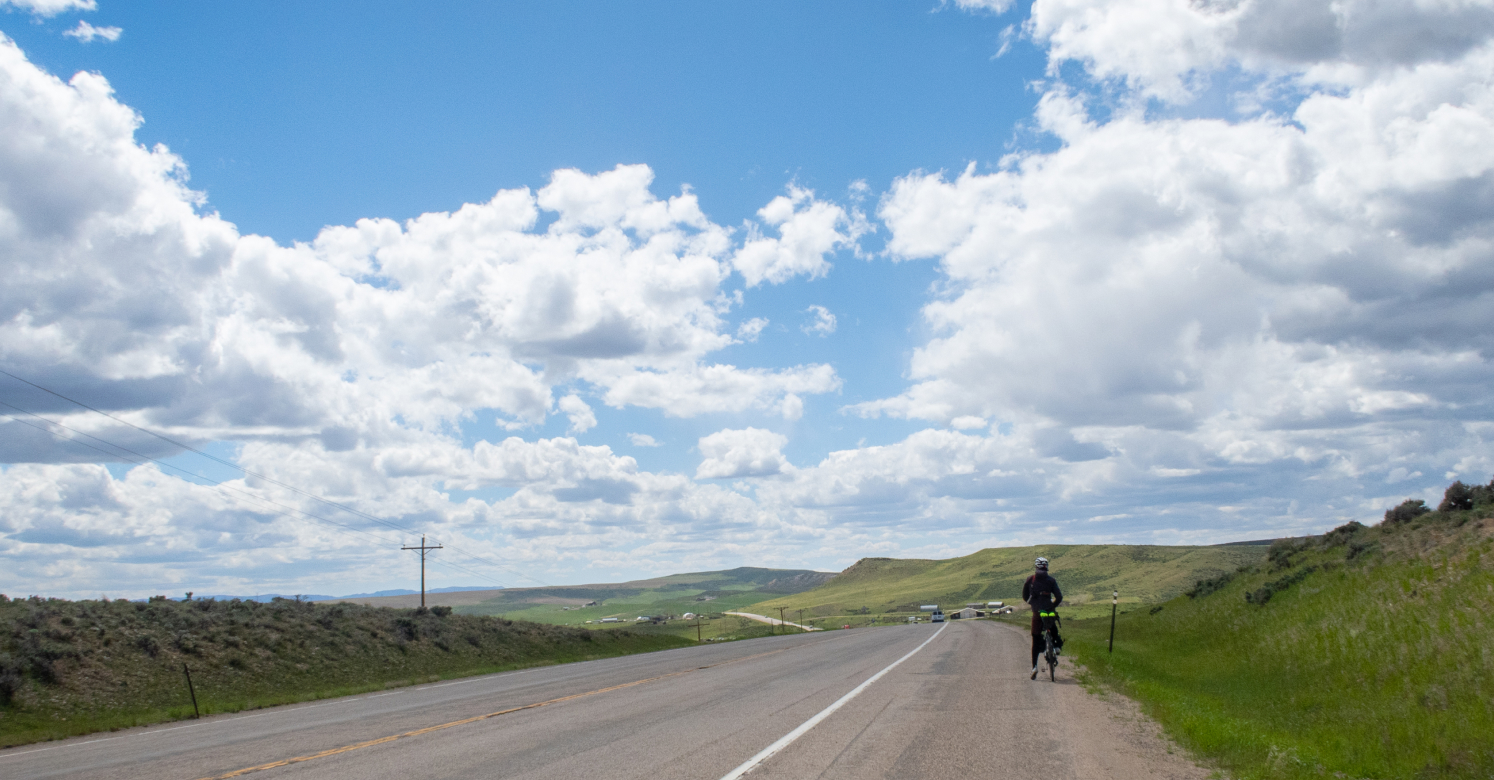 It really did appear that, if we waited an hour, the storm would blow right over us. We spotted a beer garden – the most appropriate hideout – and spent another hour sipping brews. Sure enough, the skies opened, and our route became sunny and clear. We planned to camp between towns and treated our early afternoon visit to Craig as our last refuel for the afternoon and next morning. The plan was to pedal as long as our legs would take us. By late afternoon, we noticed a state park sign off the road with little detail. A dirt road ran south of our route over a hill, and we could not see beyond it. After some looking on Google Maps and the Hammerhead Karoo 2, we discovered there was a Hot Spring over that hill, and it looked to be under 5 miles out of the way. It sounded too lovely to pass up after a long, hard day. We agreed that shorter milage with a chance to get in a hot spring was well worth it. The Jasper Hot Springs were disgusting, but we were more disgusting than the springs and climbed in anyway. Stretching in the spring water felt so good, plus it was probably some of the best recovery we had on the trip. We set up camp on a grassy area with beautiful views of Northern Colorado and settled in for what would be our coldest night of the trip. 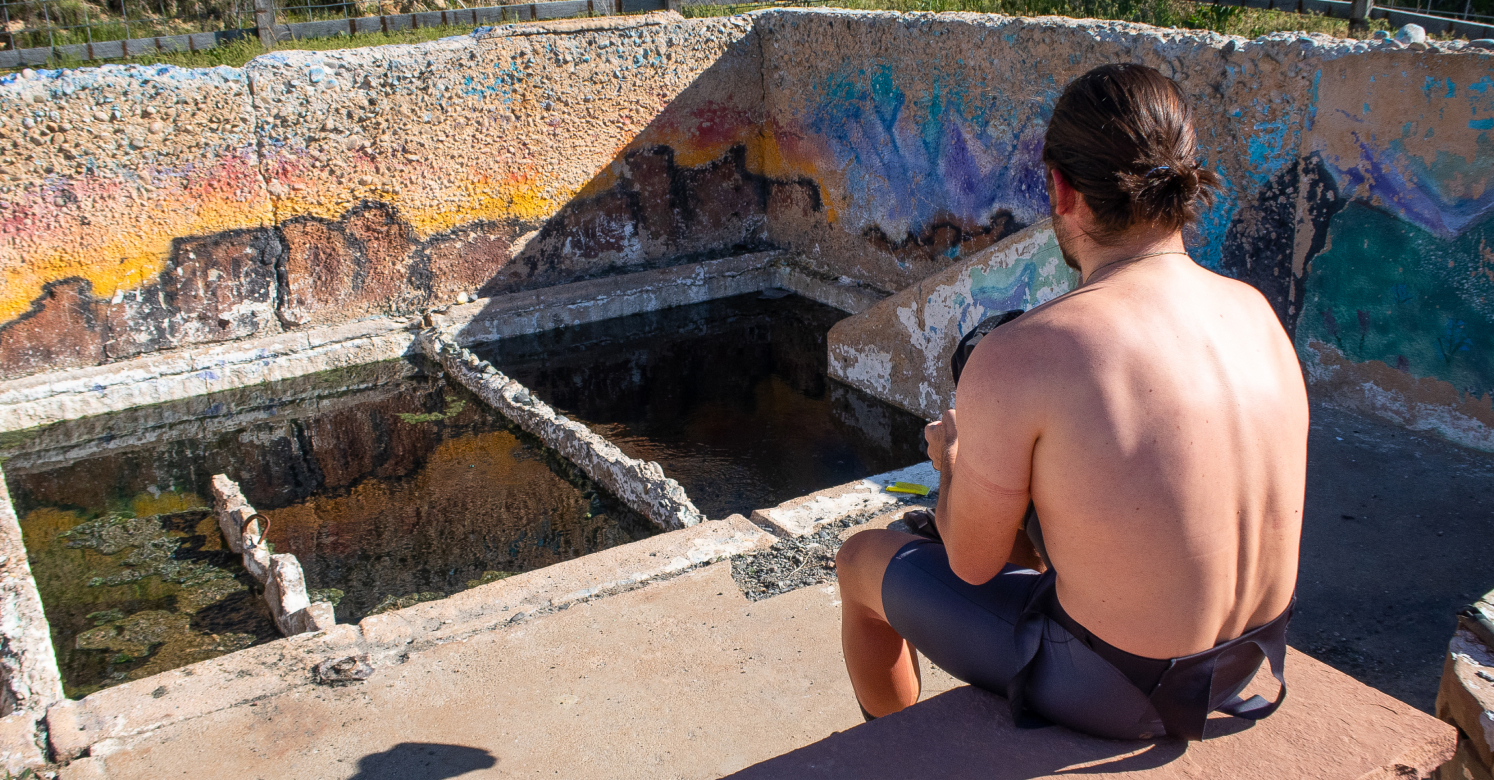 The sun was our alarm again on Day 4. This morning, we were greeted by frost-covered bikes and frozen water bottles. The temps had been in the high teens overnight. We routed out of the state park on dirt roads that minimized the detour and got us back on our route. Descending in the cold froze our hands and toes, but at least the wind was light to start and wouldn’t pick up until the afternoon. The first town we hit was Maybell, CO. We were early for the opening of the convenience store but were let in just as the coffee finished brewing. From there, we continued westward to Dinosaur, CO. With a name like that, our expectations were high, but aside from a few fun road names and a couple of dinosaur-themed playgrounds, there really wasn’t much Dinosaur, well, in Dinosaur. As it turns out, most of the fossil digs and museums are in neighboring Utah.

Another roadside grill, another burger, and we were on our way, trying to make it to Vernal, Utah. We faced more road construction leaving town before we crossed the border into Utah where the landscape changed almost instantly. Farm and highway traffic made us reconsider our route, and we found some backroad detours to get us into the heart of Vernal. This made the day almost exactly 100 miles and the brewery was a welcome sight. We ate and drank and were soon met by Corey’s wife, Kimberly, who was leap-frogging us on her drive to California. The sun set while we were still at the brewery and making camp in the dark and wind sounded like no fun. The consensus was to split a motel room for the night. 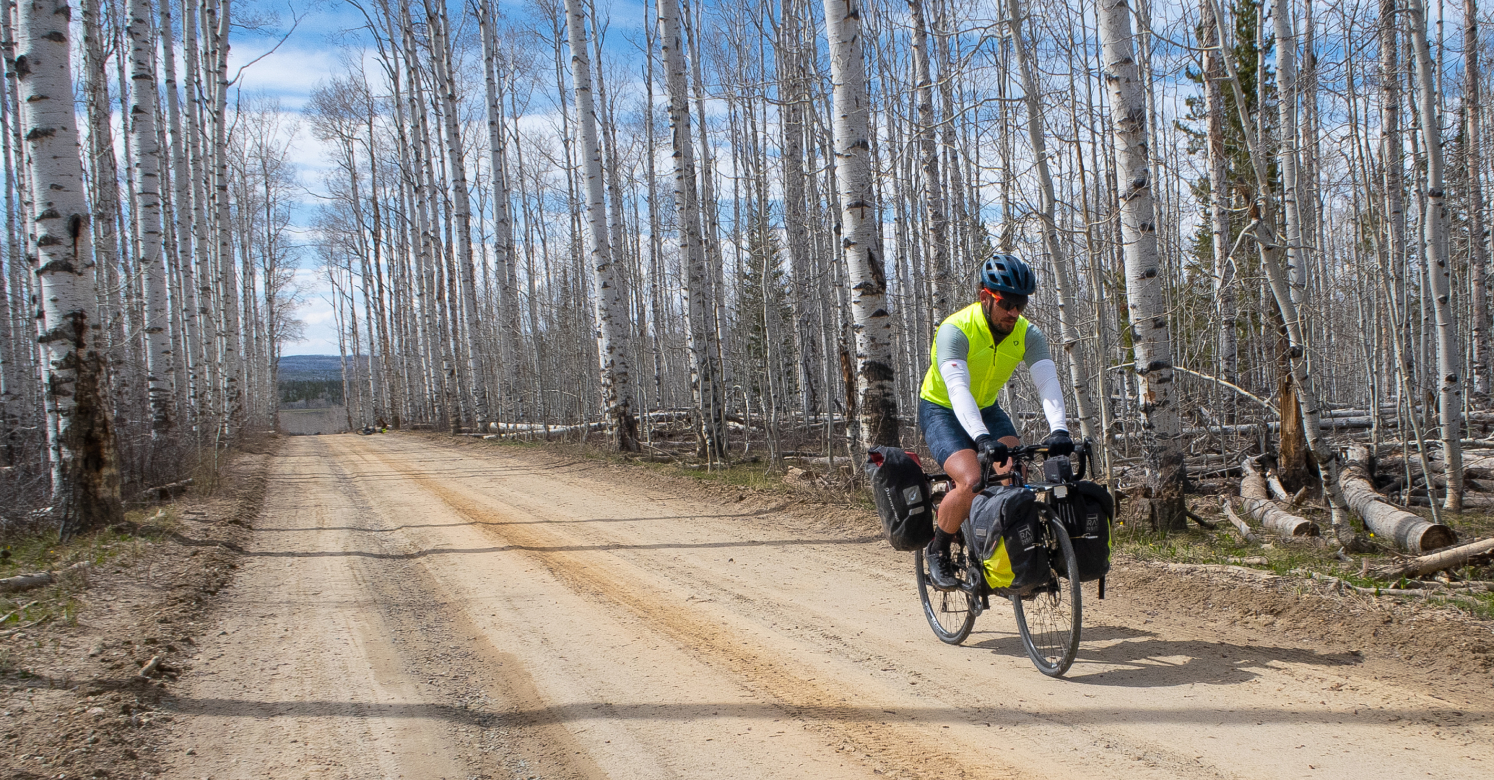 Day 5 we were treated to a continental breakfast that was of similar quality to the gas station food we’d been eating thus far. Fergus’ flight was the next day, and we were about 170 miles from his hotel in Salt Lake City. A transfer via car was essential and welcome as it helped us avoid a very trafficked, narrow, winding canyon road that we were not excited to ride on. Also, we were exhausted and ready for a break. We called it a rest day and decided to visit the [in]famous Skin Walker Ranch – a place reputed for paranormal activity! From there, we drove Fergus to his hotel, said our goodbyes, and proceeded to Provo, Utah to camp for the night. 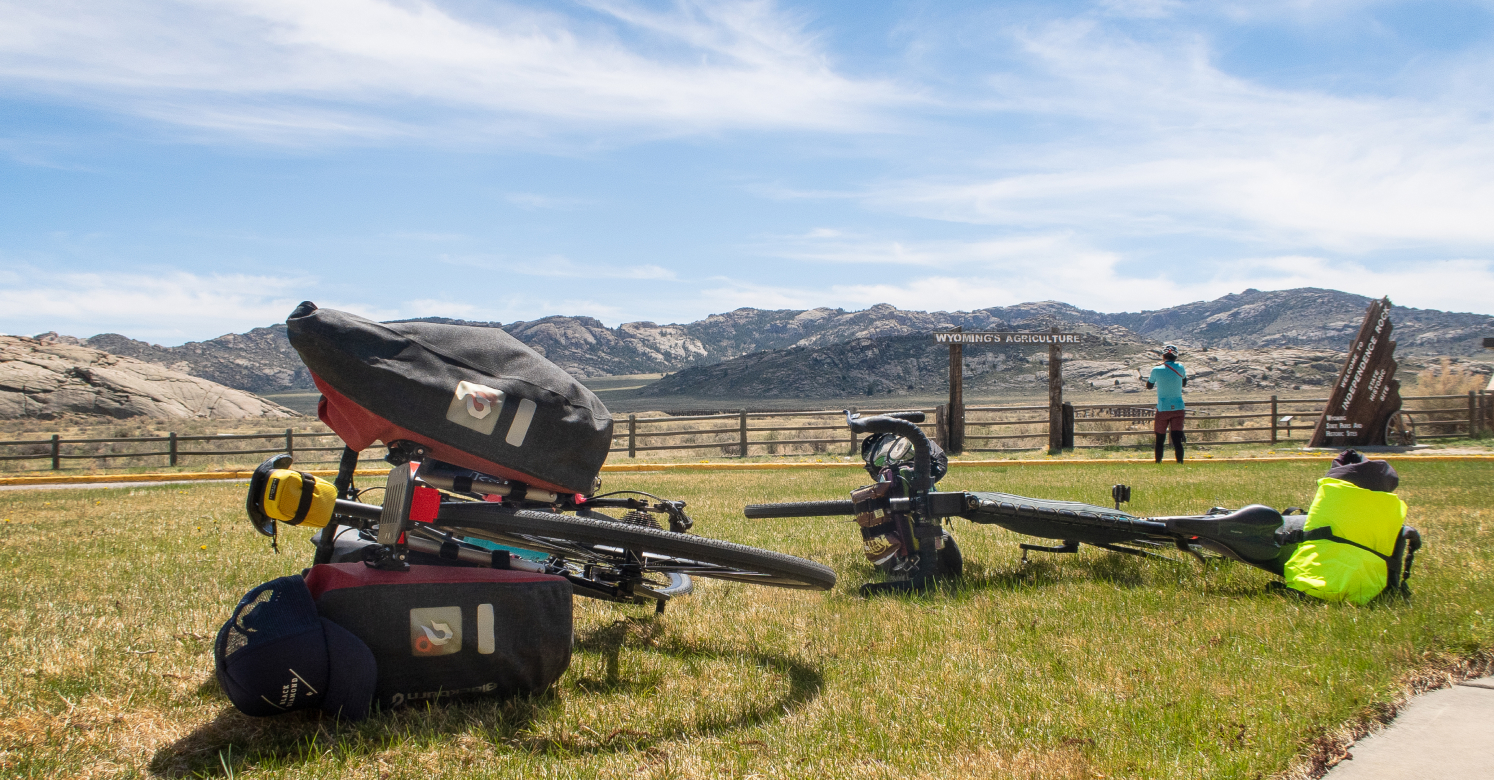